God operation! Claimed to make a house waterproof, the actual addition of "building in the building"!

[guide language] in recent years, with the continuous development of social economy, urban construction has been updated day by day. For various reasons, illegal construction and disorderly construction of urban areas are also constantly occurring, which are repeatedly banned, among which violation of construction for waterproof is common. Recently, the owners of shuangdaiyuan community in wuzhishan city were very upset. They found that the top floor of the commercial building in the community extended part of the wall after being demolished, which brought inconvenience to their life

In the wuzhishan shuangdaiyuan community, reporters saw the street shops on the roof, there are many exposed steel and wood, construction of the scaffolding has not been removed. The owners said that since they moved in in 2010, the development had two and a half stories of storefront shops, with a half-loft structure on the top floor. Last June, workers came to tear down half the attic. From may this year, workers came into the building and built the original semi-attic into a third floor, obviously changing the appearance of the building, which also caused them a certain amount of trouble.

Double in wuzhishan and garden residential owners Mr. Wang said: because of the village building itself is relatively dense, ventilation is not very good, now such a block, residential ventilation more bad, and on both sides of the floor, then buy when the light is good, now a layer, the following are all black, on the fourth floor a little sunshine all could not see.

The owner questioned whether the top floor would be removed and then built, and whether there were safety concerns. The reporter finds the staff member of estate property to understand the situation. Wang zhiqiang, manager of the wuzhishan branch of sanya gold hotel property service co., LTD., said, "our property was indeed blocked at that time, but the other side said no, we need to decorate it to be waterproof. The property owner of the commercial building is a proprietor surnamed Yang. In August 2016, the owner submitted the application for renewal of the building to the wuzhishan municipal planning committee, saying that the commercial building was in disrepair, with aging exterior and interior decoration, severe shedding and severe leakage of roof, which seriously affected the use function of the building, so the owner wanted to renew the building. It is also unclear whether the application has been approve 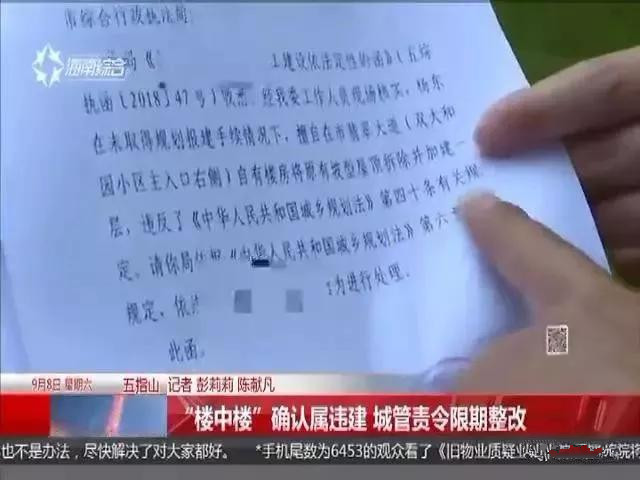 n June 2017, the owner arranged the workers to enter the site for construction. At that time, the owner also reported the situation to the urban management department.
Comprehensive administrative law enforcement bureau deputy brigade in wuzhishan ChangYou Jiang Jieshao said: "the owners is a noise complaint at first, reflect the construction noise affect their normal rest, we had to investigate, investigate, commerce-residence building owner Mr Yang said he building this layer of the leaks, he will send the original down bare slope type, considering the house belongs to Mr Yang, he hurt his own things we ignore he.
At that time, the owner, Mr. Yang, removed the top floor of the building, claiming that it would return to its original state after completing the waterproof work, so they did not do anything about it, the chengguan department said. But this August, owner Mr Yang did not restore the original, but changed the commercial building's appearance.
"Building in the building" confirmed that the violation of construction management ordered rectification within a time limit
To learn about the situation, reporters have also made several phone calls to try to contact the owner, Mr. Yang, but have not been answered. So, does Mr. Yang change the appearance of commercial buildings after the approval of relevant departments?
Wuzhishan city comprehensive administration law enforcement bureau vice battalion long you jiang introduced: he this present situation, we follow the plan, live to build of also see, the two sides of Mr. Yang house has widened, each side has widened more than 100 square meters, original slope form, now changed to parallel, that is, with normal floor same. Now according to the law of the People's Republic of China on urban and rural planning, it is also illegal construction. 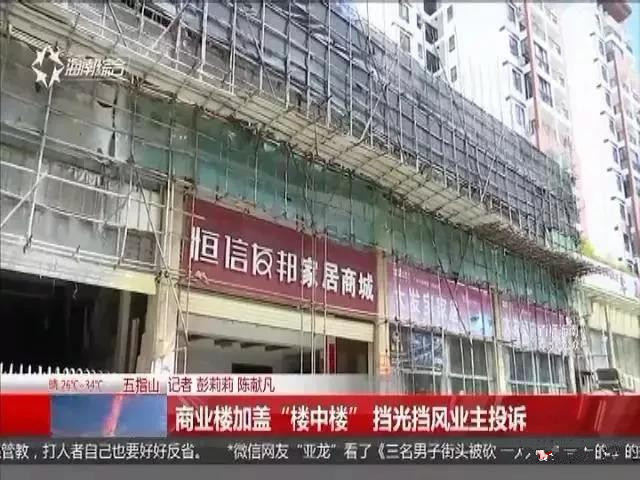 City management expresses, after checking, owner Mr. Yang is in did not obtain program to apply for construction formalities circumstance, remove without authorization original slope form roof and add build one layer, belong to violate construction behavior. On September 3rd, the chengguan had given Mr Yang a notice of deadline for rectification.
"The house has been determined as illegal," said youjiang, deputy head of the general administration and enforcement bureau of wuzhishan city. "we have now informed Mr. Yang that the building must be demolished by himself before September 10. We will keep staring at this place for two days. We will not allow the other party to do the work again. If the other party refuses to do the work, we will force the demolition!